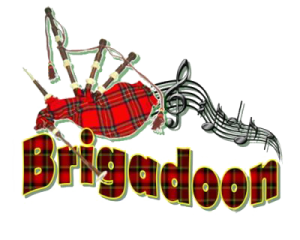 This production ran on Friday through Sunday evenings from May 24th through June 16, 1968. 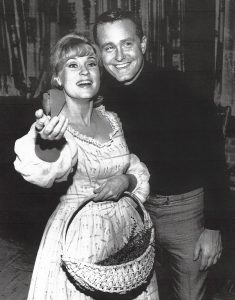 A portion of the “Down on MacConnachy Square” number in Brigadoon from Burn Brae’s opening production. 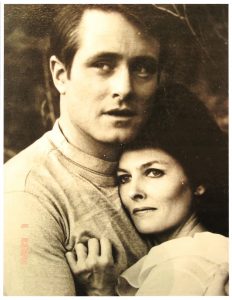 Data about this production was donated by John Kinnamon, Francine Joyce, the Library of Congress (R.L. Coe theater program collection) AND an original program from Bob Brenner.

[*] Author’s note: “Blaze Starr” was a well-known DC/Baltimore ecdysiast during the time of this production of Brigadoon. She did not appear in the production; however, because her name appears in the program, it has been replicated here.

I first met John Kinnamon on the stage of the theater department at the University of Maryland in a production of Kiss Me Kate. Our next encounter was with the American Light Opera Company in Washington, DC. ALOC was the largest semi-professional musical theater company in America, founded in 1960. When it closed in 1968, it left no stages in the Washington metropolitan area for this vast company of immensely talented musical theater performers to display their talents. John witnessed this and created the first, and in my opinion, the finest dinner theater in the area. We all jumped at the chance to participate, and thus formed the original company of actors to populate the BBDT stage.

John only used a live orchestra in the early years of BBDT. It was kind of like a Mickey Rooney/Judy Garland movie. Everyone pitched in to “put on a show.” Every actor loved this theatre, its management and its staff. We couldn’t wait to get to the theater every night. The early years for BBDT were a little lean. But as word got out that you could see a Broadway Show and have dinner for a price less than you would spend for a show at the National Theatre, the place began to fill up. By the time we got to the first production of 1776, we were up to as many as ten shows per week and never an empty seat. The quality of the productions would equal any national tour you could see in DC. Only the venue and sets were smaller.

I had the pleasure of being the first actor to set foot on BBDT’s stage in the first production of Brigadoon. The second production we did was West Side Story. Although I had done West Side Story before, and I was in this cast, I could not resist standing in the wings when not on stage and watching this superb cast at work. West Side Story was the first show I ever saw on Broadway, and though that production blew my mind, BBDT’s cast was better. Mary Ann Chinn and John Kinnamon were  truly made for the Maria and Tony roles. Mary Ann brought tears to my eyes every night as she held the dead Tony in her arms. It was an extraordinary memory in theater.

My acting career covered some 40 years, working in over 40 different theaters and appearing in almost 100 productions, but my years with Burn Brae were my favorites.

Probably no single show had more of an impact on me than BBDT’s first production of 1776. The timing of the show, opening during America’s Bicentennial celebration, and the length of the run, occupied a major part of my life. First, it ran for 18 months, setting the dinner theatre record for Tony award-winning musical runs in America, a record that still stands. During that phenomenal run, I had the good fortune to both direct the production and fill the role of John Adams. My involvement as Adams lasted nine months; however, I continued to return to the theater every Friday night and give notes to the cast after the performance. The show remained very tight, as it was on opening night. I also conducted periodic auditions to replace actors who were leaving the show for various reasons, but primarily due to fatigue.

On closing night, having invited every actor who had appeared in the show, to attend the final performance. At curtain call, I invited everyone to take a bow on stage with the final cast. It was the most emotional closing imaginable.