After opening in late May of 1975, this production continued to run through the entire 1976 calendar year and closed on New Year’s Eve of that year.

The show ran at Burn Brae Dinner Theatre for 430 performances and was seen by 130,000 attendees. It still holds the national record for the longest-running Tony Award-winning musical outside New York City.

NOTE:  We were fortunate to have located a video taken in 1975 of the original cast of this production. Videotape media at that time was, by today’s standards, primitive. Nevertheless, we consider this video recording to be one of our most valuable assets, primarily because of the quality of the production, the talents of the cast, and the positive comments collected from both professional critics to audience members who attended sold-out performances for eighteen months. As such, we have included the video of the entire performance elsewhere on this site. Viewers may watch the entire show or move quickly through the video to re-visit their favorite musical numbers. The video is available here.

“To be sure, the company’s original cast changed during the show’s 18-month run; MANY actors came and went. Nonetheless, the show never lost its edge or its popularity, and the audiences continued to support it, some by returning often with a new group of friends each time. Undoubtedly, the most special show was the night of July 4th, 1976. The air was electric, the energy high. The audience was standing-room only, and when the overture started and the cast members took their places onstage, goosebumps proliferated throughout the room. I know. I was there, playing the role of Edward Rutledge that night. I had started months earlier as a replacement player for the Roger Sherman role, and also played Livingston a few times. But it was the thrill of a lifetime to play Rutledge in THAT show on THAT night with THAT company in THAT theatre! I will never forget it!”
– Wayne Hamilton, MFA 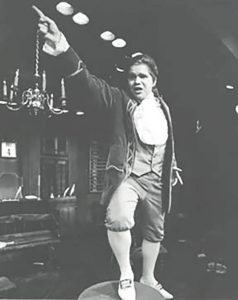