NOTE:  We were fortunate to have located a video taken in 1975 of the original cast of this production. Videotape media at that time was, by today’s standards, primitive. Nevertheless, we consider this video recording to be one of our most valuable assets, primarily because of the quality of the production, the talents of the cast, and the positive comments collected from both professional critics to audience members who attended sold-out performances for over eighteen months. As such, we have included the video of the entire performance elsewhere on this site. Viewers may watch the entire show or move quickly through the video to re-live their favorite musical numbers. The video is available here. 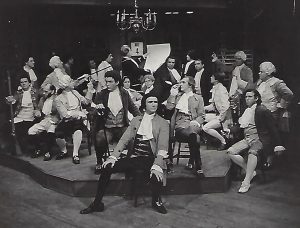 Data about this production was contributed by Bill Pierson, Frank Anzalone, John Degen and John Kinnamon.