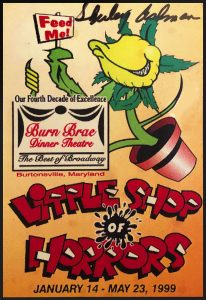 The signature at the top of the poster is from Shirley Ashman, Howard Ashman’s mother. Howard wrote the show’s book; Shirley came to Burn Brae from her home in Baltimore.

Data about this production was donated by Tina DeSimone and David James.